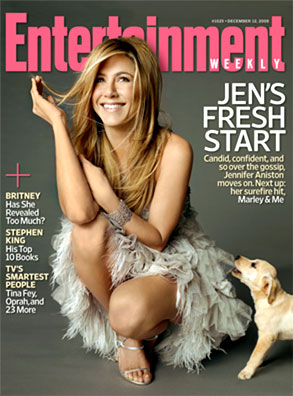 Jennifer Aniston is pausing to address all the pregnancy rumors surrounding her.

“Oh my God, it’s hysterical,” she says in the latest issue of Entertainment Weekly about speculation that she is carrying current beau John Mayer’s baby. “It’s almost going to take away the fun from actually being able to say one day, ‘I’m pregnant!'”

In other words: “Stop stealing my thunder, motherf–kers!”

The Marley & Me star adds that while we won’t be privy to a baby bump anytime soon, she does feel motherhood is in her future…

“I’m on the verge of it in some way—or it’s something I long for,” she says.

However, what she clearly doesn’t long for is the ongoing drama surrounding her, her ex-hubby Brad Pitt and Angelina Jolie, citing in particular the recent issue of Vogue magazine that highlighted Jen’s quote, “What Angelina did was very uncool,” on its cover.

“I was just surprised that Vogue would go so tabloid,” she says, insisting the so-called slam was taken out of context. “I was bummed. But you almost expect it. Big deal. Done. Next.”

This year’s annual holiday lingerie fashion show will be held for first time in Miami at Fontainebleau Miami Beach. The Victoria’s Secret Fashion Show was taped on November 15th in Miami, and will air Tonight at 10 p.m. ET on CBS. The annual holiday fashion show will feature supermodel Heidi Klum, and top models Alessandra Ambrosio, Adriana Lima, Selita Ebanks, Marisa Miller, and Miranda Kerr, among many others. I must say the lingerie looks sexier and sexier every year. I love to see something sexy and spicy to make my night and get me in the mood to go out shopping the next morning for that hot new secret piece of lingerie.

According to THE ASSOCIATED PRESS, A Mississippi family who lost their home in Hurricane Katrina — and got a new house partly built with last year’s Rockefeller Center Christmas tree — will be among the throngs attending this year’s lighting ceremony.

An eight-ton, 72-foot Norway spruce will be illuminated at 8:58 p.m. Wednesday in the center’s plaza near the skating rink and the gilded statue depicting Prometheus bringing fire to mankind.

Tony Bennett, Harry Connick, Jr., Jamie Foxx and Beyonce are among the entertainers scheduled to perform.

The guests include Tracey Davison, 40, an assistant teacher from Pascagoula, Miss., and her four young daughters.

The family had moved into an apartment just two days before the storm ravaged their neighborhood near the Gulf Coast. Fleeing with just a few suitcases in tow, they lived temporarily with a friend, at her brother’s, in a docked cruise ship and a Federal Emergency Management Agency trailer.

Davison and Ashunti, 10, Nylah, 9, Majsa, 8, and Karly, 4, were chosen to receive a new Habitat for Humanity home that former President Jimmy Carter, among others, helped build. The three-bedroom, baby blue home was finished in September and the family moved in a couple of weeks ago.

Lumber from last year’s tree was used to make two-by-fours that were placed in the walls and floors of their living room.

“It was a dream come true. We’re very, very excited to be in the house.” This year’s tree, which is 40 feet round, has been decorated with 30,000 energy-efficient LED lights on 5 miles of wire, topped with a massive crystal star. It was donated by the Varanyak family in Hamilton Township, N.J.

While the first official lighting was in 1933, the first Rockefeller Center Christmas tree was put up two years earlier during the Depression by workers building the Art Deco complex.