The Michael Jackson Memorial Photos: The Coffin, The Brochure, The Kids, The Hearse & More…

It’s over. The funeral and the memorial service for the King of Pop have occurred and the Jackson family had their own private luncheon at the Beverly Wilshire Hotel in Beverly Hills.

It was beautiful, moving, well coordinated and produced. Wonderful performances and eloquent speeches echoed the sentiments of most of the world. Somber but still warm and loving, it was a respectable and fitting tribute.

You’ll be able to see broadcasts and videos of Mariah Carey, Trey, Usher, Smokey Robinson, Stevie Wonder, Lionel Richie, John Mayer and the other performers and speakers, along with his daughter’s heartbreaking comments, played over and over again online, on YouTube, on tv, etc.

But let’s face it, what you really want to see is that coffin, his kids, the brochure and other little incidentals. I’ve got those here for you, thanks to the AP and Getty images.

The back of the memorial brochure:

The motorcade leaving Forest Lawn cemetery on their way to the Staples Center:

A good look at that gold-plated Casket (Coffin):

Above and below: The Promethean velvet-lined model by the Batesville Casket Company. Rumor has it that, Michael Jackson ordered it for himself, after seeing that James Brown was buried in the same years ago. It’s a $25,000, solid bronze, 14-karat gold-plated, custom casket.

The pallbearers, those of whom were the Jackson Brothers, each wore a single white sequined glove:

Above: From left: Randy, Tito, Marlon, Jackie and Jermaine

Above: a tender moment as brother Jermaine tosses a rose onto Michael’s casket while singing “Smile”.

The Children: Paris, Prince and Blanket:

Above: the heartbreaking and unexpected speech from Paris Jackson

Above: A Michael Jackson mural with fan’s signatures stands in front of the Staples Center.

Above: A Michael Jackson impersonator poses outside at the public memorial service at the Staples Center.

See a video of the memorial in its entirety here.

Kanye West released his new Louis Vuitton shoe’s this past week and in most places, they sold out FAST. Kanye interned with Louis Vuitton and now it is rumored he is interning with Gap to learn more about the business as well. The line consists of three models; The Mr. Hudson, the Jasper and the Don. Prices Range From $700-$1140

Check out some photos below. 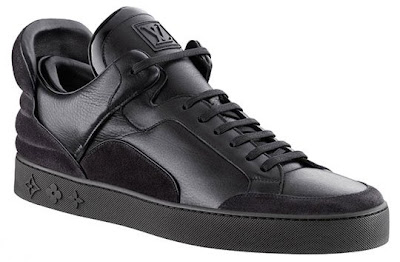 I came across a blog a few days ago, and read a post that they wrote about Michael Jackson. It was interesting to read in detail, what their thoughts of him were. I thought I would share that post with you.  You can do so below after the photo jump.

In recent days, ten to be exact, I’ve been enthralled in the world of Michael Jackson. You may have noticed the number of MJ posts since his passing on June 25, 2009. There was more enlightening information about the man that I was tempted to post but decided not to so I wouldn’t bombard the blog with MJ all day. However, I felt my first written post about Mr. Jackson wasn’t enough. I have learned more about the man behind the music since that day and became more inspired and amazed by him. I also felt guilty.

He was truly misunderstood and believe me, I know what that feels like–it’s annoying, it’s hurtful and it’s frustrating. And like so many Americans, I, too, misunderstood Michael Jackson. No, I didn’t think he was a child molester. However, I didn’t rule out the possibility either. I just didn’t want to believe it for there was no true evidence from the two cases and I just didn’t want to think that he did it and fall into the media’s sensationalism.

Nevertheless, I did wonder about his seemingly bizarre behavior and his endless love for children and child-like things. I did wonder about his skin color and the ever changing structure of his face. I did ponder over his career and how much love and respect he received during the Thriller and Bad era versus the Dangerous and Invincible era. I wasn’t that excited about the comeback tour. I guess, in a sense, I wasn’t paying that much attention to Michael Jackson. I didn’t know the man at all and like I said in another post, I was not a fanatic. I only appreciated the music and the performance. The rest was up to interpretation.

Sadly, I didn’t realize how brilliant, caring and interesting this man was, and still is in spirit, until after his transition. I read and listened to a speech he did at Oxford University in 2001, which I didn’t know about until after June 25th. It was truly a raw, honest and beautiful speech. It made me laugh and cry. It also made me realize how wrong I was about him. He didn’t do anything to those kids. He couldn’t possibly harm a child. He loves children too much to ever do that. He even said in an interview that he would slit his wrists before hurting a child in any way.

Even though I’ve never fault him for those charges, I still felt extremely guilty after that speech, almost to the point of feeling slightly sick to my stomach. To be excuse of such a heinous act and to have almost everyone look at you differently, to one degree or another, must have been the most painful feeling. To be rumored of not liking who you are over and over again due to a disease that couldn’t be controlled must have been frustrating. To be constantly questioned about it and to be constantly not believed had to have been a nightmare. To be put in a situation where you are trying to do the best by these children by providing them their childhood with unconditional love and support, financial and otherwise, to only be subjected to their parents’ greed must have been heart wrenching. To be labeled as “wacko,” a “freak” and other negative names must have hurt like hell. And to know that there is a possibility that all of this was happening due to the extreme success of a talented, intelligent Black man, who outsmarted the big honchos in the music industry, made him believe that it was a conspiracy against him and rightly so.

He was not perfect at all. He had flaws. He made mistakes. To his omission, he compensated the lack of childhood in his early years by building Neverland Ranch and having friendships with children. He outbid a friend, Paul McCartney for the publishing rights of Beatles songs and might have married Lisa Marie Presley for the wrong reasons. He was addicted to painkillers at one point in his life. He also had too many unnecessary cosmetic surgeries on his nose. He said things that would be deemed questionable. He did things that most would say is odd and eccentric. He was a human being in all its complexity.

I don’t want to make him appear to be a saint but I do believe wholeheartedly that his intentions were good in his music and in his personal life. He wanted to end the mistreatment of true artists in the music business, especially Black artists. He wanted to help heal the world through an initiative of rebuilding the parent/child relationship. He spoke out against racism, injustice, police brutality, greed and other social issues that America still haven’t dealt with, through song, speeches and interviews. As one of his bodyguards said, he was the most misunderstood person in the world.

Michael said in one interview that if a lie is told over and over again, you will begin to believe it. He also said that the truth will outlive a lie. I think with his recent transition, people are finally seeing the truth and appreciating the music, the dance and the man of Michael Jackson.

And I have a funny feeling that he would forgive us all for misunderstanding him while he was here on this Earth.

Usher was one of the most visibly moved performers as he delivered a chilling rendition of Michael‘s “Gone Too Soon.” Usher frequently sang directly to Michael‘s mother, Katherine Jackson, and knelt before her when he finished.