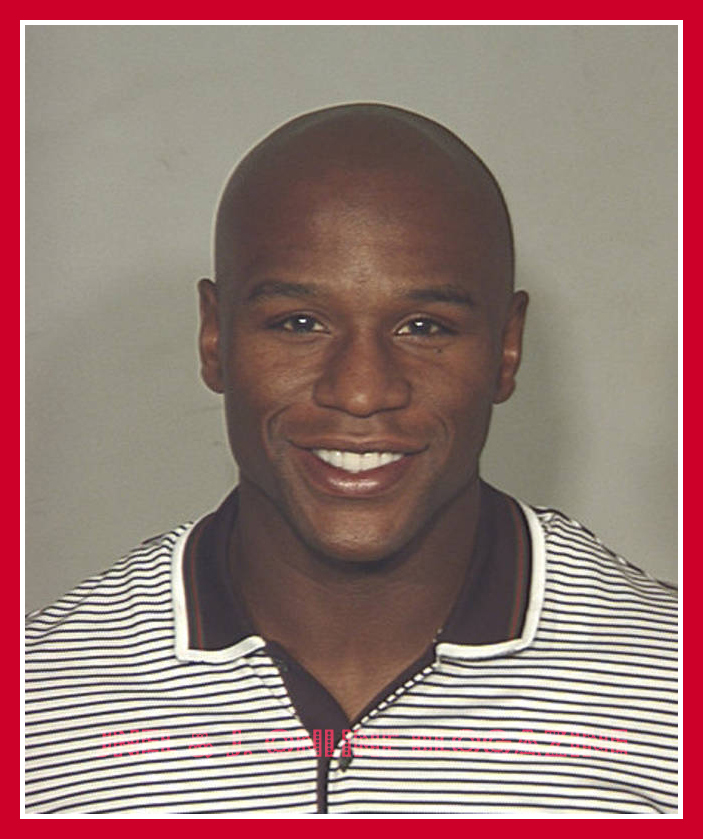 Boxer Floyd Mayweather is the latest celeb that has found himself in some baby mama drama….at least he’s smiling about it. Earlier today he was arrested in Las Vegas on a felony theft charge stemming from a domestic complaint from his child’s mother. The mother of 3 of his kids sought a protection order after he allegedly beat her and stole some of her personal items including a cell phone. Floyd went missing but was busted earlier today in Vegas on a Grand Larceny charge.

Yesterday evening, his friend 50 Cent took to his Twitter account and basically put all of Floyd and his baby mom’s business on front street.

Another case of angry baby mama wanting money. Police are looking for @FloydMayweather. I just got off the phone with him. She’s claiming he hit her but has no bruises. Floyd went to see his kids last night if a fighter of Floyd caliber hits u, u would b bruised.

I talked to him before and after the situation he wasn’t even upset.He said he asked her why was the house so dirty she started trippin’. He bought nice clothes for his kids they were all over the place.His baby mama said shes not gonna force them to wear clothes they don’t want. I told him that’s crazy. I know how he felt. I met her before so I told him she would calm down. Can’t believe she called the cops.

She has a girlfriend that stays in the guesthouse that Floyd is paying for her as child support that is helping fuel the situation. Floyd said he feels like her girlfriend is using her and pushing her in the wrong direction. This is crazy to me. I performed in club pure on NYE in Vegas I remember Floyd showing me a ring he bought her for $1M. Who can u trust!

This sh*t really scares me man. she’s a smart girl I talk to her a few times. I hope she just stops my stomach hurting behind this sh*t. I speak to Floyd every day he like my brother his baby’s mother did this sh*t before in 2003 dragged him to court then said he didn’t hit her.

According to the complaint, his baby mother claims that Floyd showed up at her house Thursday morning and began yelling at her about her new boyfriend. He then pulled her by her hair, threw her to the ground and began punching her in her head.

She claims he continued to beat her in front of their kids and threatened them by saying that if they ran or tried to call the police he would beat them the same way. He also allegedly told her he would kill her and her boyfriend.

“WOW!! I don’t know if I should be shocked or not surprised, being that he’s been in the media for the past few weeks. Sounds like he’s seeking some serious attention.”

One thought on “Just In: Floyd Mayweather Arrested While 50 Cent Tweets About It”