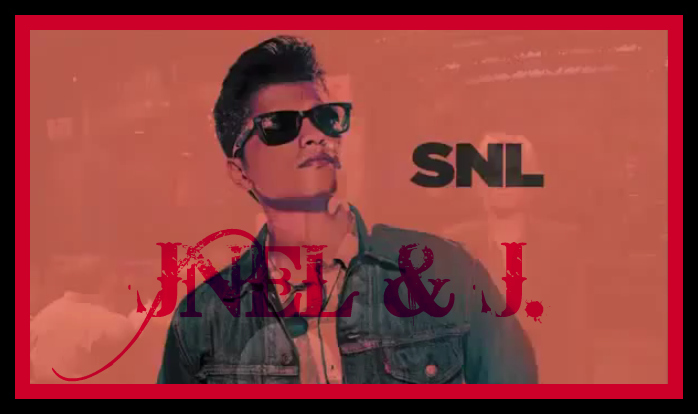 Bruno Mars has officially scratched off “perform on Saturday Night Live“ off of his bucket list. His dream became a reality when he was the musical guest last night (Saturday, Oct. 09, 2010) on “SNL” for the first time. He was looking very “Hairspray” retro, rocking a pompadour, blue blazer, black pants, white button down, black skinny tie, and some black & white oxfords to match his band. Quite gentlemanly. Nice way to celebrate his 25th birthday, which was actually last week.

Mars performed 2 songs last night, the first being his #1 hit “Just The Way You Are,” which was backed up by his band. It also included a string section and a tambourine-thumping backup singer. The other was a mix between “Nothin’ on You” into “Grenade.” When Mars returned to the stage, he picked up a guitar and plucked a mellowed-out version of his chorus for B.o.B‘s smash “Nothin’ On You.”

The singer then told the crowd, “That was then, this is now,” and put down the guitar as he launched into “Grenade.” Mars peppered the performance with hip-swaying moves, looking like Elvis Presley. He finished his performance in a very classic rock-star style with an excited jump in the air. Perfect vocals and what a show!

Bruno Mars‘ debut album ‘Doo-Wops & Hooligans,’ is in stores NOW. It was released, Oct. 5th, with his single “Just the Way You Are” topping charts, according to Billboard.com. Go get a copy if you haven’t yet. Such a DOPE record. It’s a must-have!

Check out some photos from Bruno’s performance taken from my phone via my TV, sorry for some of the blurry ones….

Check out Bruno’s performances below after the jump….AMAZING!!

“Just the Way You Are”

“Nothin’ on You” and “Grenade”