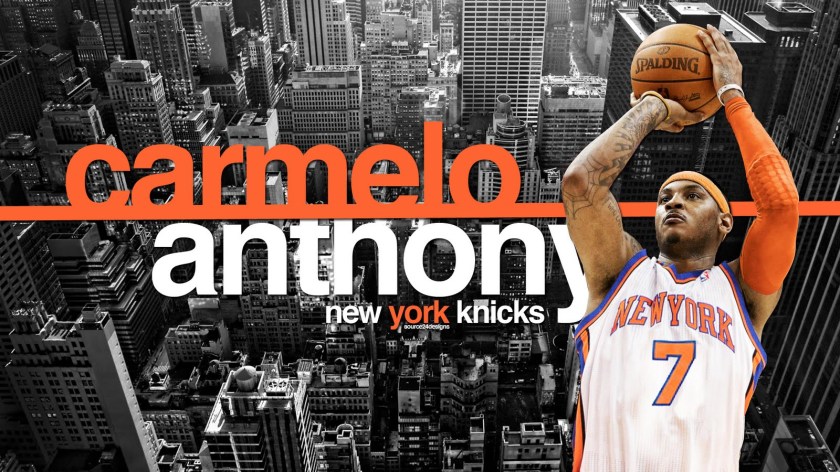 As you may all already know, Carmelo Anthony is officially a New York Knicks player. When I got the phone call that it was official I was beyond myself. I was so excited and proud of the great news. I’m a bit upset that I didn’t make it to his first official game as a Knicks, due to being out of town but I will sure make it to a game real soon. I can’t wait!!

In other news, according to to his wife, the former MTV VJ La La Vazquez, Carmelo Anthony makes delicious lobster tails. This kitchen intimacy was revealed Wednesday at halftime of Melo’s Knicks debut, in a courtside television interview.

Carmelo Anthony is hugged by his wife La La and his son, Kiyan Carmelo Anthony, at a news conference to introduce him as one of the newest members of the Knicks.

“He’s an excellent cook,” Vazquez said of her husband, who finally and mercifully arrived in New York this past week after months of overwrought drama. Standing aloft a pair of striking six-inch Louboutins in Knicks blue, the Brooklyn-born Vazquez beamed as she recalled the news of the mega trade. “Baby, we’re coming home,” she said her husband told her.

Since this is New York, the conversation quickly pivoted to real estate. Vazquez, who will be starring in her own VH1 reality show—La La’s Full Court Life—said she’d already been flooded with leads.

It was a charming moment of Anthony family diplomacy, and not the first. Earlier that night, Knicks owner James Dolan almost managed to undermine Anthony‘s feel-good introductory press conference with a ramble attacking rumors of his continued collaboration with ex-general manager and coach Isiah Thomas.

After a gracious nod to the departed players the Knicks dealt to acquire Anthony, Dolan defended his relationship with current GM Donnie Walsh and said, “I will say this very directly: While Isiah Thomas is a friend of mine, a very good friend of mine…”

“Dada!” Carmelo‘s son, Kiyan, whispered loudly, interrupting the man who is set to pay his father a $65 million, three-year contract extension. Anthony, seated on stage next to Dolan in an orange headband and Knicks sweats, cracked up, as did many in the crowd.

The tension had been sufficiently punctured. This would not be a night of finger-pointing and recriminations. Even after Dolan continued, he was soon back smiling with his new star.

The enthusiasm of the Anthonys melted the complicated feelings of the deal—at least briefly. On Wednesday night, this was not a forced-hand acquisition of a superstar eager for a maximum contract with his desired team.

This was a gooey homecoming.

Later, before a rowdy Garden crowd, the Knicks would pluck the violin some more with a video that burnished Anthony‘s Red Hook roots and his toddler-aged worship of Bernard King (Baltimore—where Anthony was raised, became a school hoops legend and built a youth center that bears his name—wasn’t mentioned). Diddy‘s spare anthem with Skylar Grey, “Coming Home,” tinkled in the background.

Anthony is thrilled to be here and stay here. (The long term is not so certain across the river in New Jersey, which pulled off its own major deal on Tuesday, acquiring Utah All-Star guard Deron Williams.) In Anthony and Amar’e Stoudemire the Knicks have two stars in their twenties enamored of a franchise that hasn’t won a title since 1973. They buy into the mythology, the bombast, the center-of-the-universe-ness that LeBron James so obviously did not.

The thing is, they also have to play basketball, and right now they have to do it on a depleted team. On Wednesday, despite 27 points from Carmelo and 21 from veteran add-on Chauncey Billups, the Knicks treaded water against the dreadful Milwaukee Bucks before finally winning, 114-108.

The Big Debut is out of the way. But there is so much else in the path—Boston, Miami, Chicago; the lack of a dynamic center; the steep learning curve of new players trying to adjust to unfamiliar coaching and tendencies. This is what Carmelo Anthony wanted and why he turned a pair of franchises upside down. It won’t be as easy to fix as lobster tails.