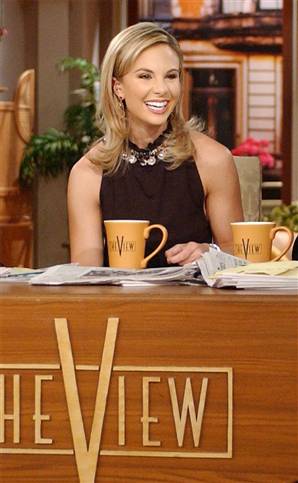 Elisabeth Hasselbeck Pregnant Again!
The View host just announced on the show that she’s three months
pregnant with her third child. Mazel tov, Lizzie. You know, “Palin” could work as a boy’s name or a girl’s name, just sayin’.

Megan Fox: Like Angelina Jolie, Only Not Terrifying…
Megan Fox supposedly will make the next Lara Croft: Tomb Raider movie, which inspires the News to make a list of what she has in common with Angelina Jolie.

Former New Jersey gov Jim McGreevey says it’s not true that he tried to bribe his way into a Hannah Montana show for his daughter, and he has the ticket stubs on his fridge door to prove it.

New Citigroup chair Richard Parsons took Amtrak to D.C. for a meeting with Obama, doing the budget-y right thing after that whole flap about that $50 million jet the bailed-out company just canceled.

RFK Jr.‘s daughter, Kick, who goes to Stanford, has supposedly moved to New York to intern for Jann Wenner at Rolling Stone.

Cindy Adams says who the big inside-knowers think are going to get the major Oscars. Adams also says that John Updike, who just died, “wrote trillions of words.” C’mon, lady. The man was prolific, yes, but trillions?

Then Liz Smith says something about Daniel Radcliffe inviting Sasha and Malia Obama onto the Harry Potter set.

Hilary Swank’s ex Chad Lowe and his girlfriend are apparently expecting a baby girl in May.

Drew Barrymore and Justin Long are no longer dating but still hanging out and laughing together. Nice!

Jessica Simpson may not really be a size 2.

Stephanie Meyer, the Twilight vampire-books writer, says she won’t finish the fifth book in the series because she’s bummed someone put the unfinished version online.

Michael Cera will supposedly do the Arrested Development movie, which is supposedly going to happen after all.

Jeremy Piven took back his promise to take (sort-of?) girlfriend Ashley Chontos to the Golden Globes, so he took her to the SAG Awards, but she didn’t even get to sit with him there.

Guy Ritchie‘s dad said he hopes his son never gets back together with Madonna.

Michelle Obama will be the third First Lady after Jackie and Hillary to have a wax version of herself at Madame Tussauds.

50 Cent says he’s coming out with some kind of dietary supplement. 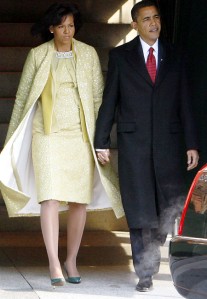 First lady Michelle Obama wore a sparkling yellow sheath dress with matching coat by Cuban-born American designer Isabel Toledo for the inauguration of her husband, a choice many applauded as a cheerful message of hope and a vote for the American fashion industry.

In some light, the embellished ensemble took on a pale-greenish cast, coordinating nicely with green gloves from J. Crew and Jimmy Choo green patent pumps.

President Barack Obama wore a red tie and white shirt with his suit, topped with an overcoat adorned with an American flag pin.

Their daughters were style icons in their own right, with 10-year-old Malia in a double-breasted periwinkle-blue coat with a blue-ribbon bow at the waist, and Sasha, 7, in a pink coat with orange scarf and satin belt, a coral-colored dress peeking out at the hem. Their coats were from Crewcuts by J. Crew. 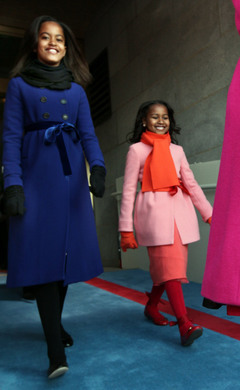 The fashion industry has eagerly looked to the election of Obama for months, embracing his wife as an emblem and ambassador of modern style, who wears clothes from young designers as well as mainstream American retailers.

Toledo designed the outfit with hopes Obama would choose it for the ceremony, though Toledo did not know for certain until Tuesday morning. She said she chose the “lemongrass” color for the optimism it represents.

“I didn’t want a traditional blue or red,” Toledo said. “That color has sunshine in it. I fell in love with it. So did she.”

Hamish Bowles, Vogue magazine’s European editor at large who curated the Metropolitan Museum Costume Insitute exhibit on Jackie Kennedy in 2001, said he sees a resemblance in the inaugural styles between the two first ladies. “She’s off to an auspicious start,” Bowles said of Obama.

“Mrs. Obama’s choice (of clothing for the inaugural ceremony) … was appropriate, dignified and elegant, but it also had a considerable element of fashion panache,” said Hamish Bowles, Vogue magazine’s European editor at large.