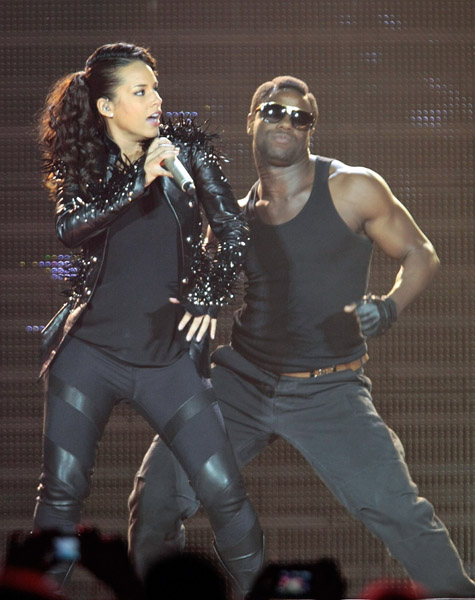 Random internet gossip sites are ranting that Alicia Keys is pregnant. Pictures of the star performing at a concert in the Netherlands showed the pretty singer with what seemed to be a swollen tummy. The convincing images spread like wildfire over the web causing widespread commotion.

Last year the New Yorker came under fire for starting a relationship with music producer, Swizz Beats who was still, at the time, married to estranged wife, singer Mashonda. News that she may be carrying his child set tongues wagging.  In the midst of the pandemonium, an insider told an American gossip site that Alicia’s camp had started to act shifty.

They said: “They’re saying that she’s decided to take a year off starting in [the fall] for ‘personal reasons’ No one has the [guts] to ask about it. We’ll all know soon enough.”

However, Alicia Keys’ manager, Jeff Robinson has since hit out at the pregnancy claims denying that his client is with child, saying:

“This rumor is 100 percent false. Alicia is currently overseas on tour and will be touring the U.S., Europe and Australia throughout the winter. And she’s using her spare time to continue to raise money and awareness for important causes like HIV/AIDS.” He said.

Today, comes what could be more proof that she is in fact, with child.

The Empire State singer has moved in with her boyfriend Swizz Beatz and has gotten engaged! As they say, first comes love, then comes marriage, then comes…

Congrats are decidedly in order, but there is at least one person who is not happy at the way this relationship is panning out.

Mashonda Deen, Swizz’s ex, is involved in a big messy lawsuit with the producer, partially over $334,000 in child support he hasn’t paid. The 7.5 carat engagement ring now adorning Alicia’s finger cost a large sum and the penthouse they’re staying in clocks in at a cool $14.5 million.

Swizz should pay up what he owes and just get a move on with his new life with Alicia. Even if he does write a check for this wrong, I’m gonna go ahead and say I’m pretty sure Mashonda will not be invited to the wedding.

I’m happy for her. I hope it comes out in fact to be true. Congrats to them ahead of time. What do you think?