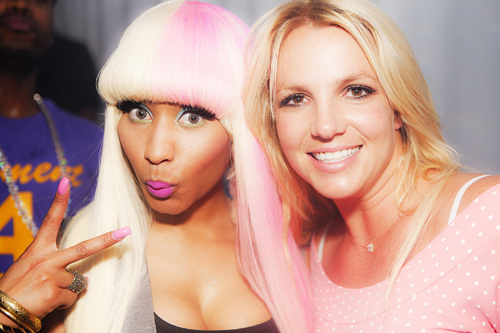 Spears originally planned to tour with Enrique Iglesias this summer, but Iglesias bowed out of the outing as it was announced. The re-tooled tour kicks off June 16 in Sacramento, CA, and will be on the road through mid-August, hitting more than two dozen North American cities. Tickets begin to go on sale in select markets on April 30.

Also joining Spears on the tour will be Jessie and the Toy Boys, led by 22-year-old pop singer Jessie Malakouti. Her “band” — best known for the track “We Own the Night”, which is being used in the CW Network’s promos — consists of male mannequins. Rounding out the bill is Australian pop band Nervo, led by twin sisters Miriam and Olivia Nervo (also known as The Nervo Twins).

“This is the ‘Femme Fatale’ tour and I’m thrilled to have Nicki Minaj, Jessie and the Toy Boys, and Nervo join me and get everyone on the dance floor.” Spears said in a press release. “Can’t wait to take the Femme Fatales on the road.”

Spears is supporting her new album, “Femme Fatale,” which is expected to debut atop the new Billboard 200 album chart. Five of her previous albums have reached No. 1.

“Femme Fatale,” has already spawned the No. 1 single “Hold it Against Me,” and the set’s second single, “Till The World Ends,” was recently unleashed.

‘This summer will be one for the books!’ Nicki promises MTV News.

After lots of speculation, Britney Spears confirmed Tuesday (April 12) that she’d be bringing Nicki Minaj along on tour. The pairing of the Femme Fatale and the Barbie seems like a match made in pop-culture heaven, and Minaj couldn’t agree more.

“I am beyond thrilled to tour with Britney. It’s an honor. She’s an icon,” Nicki told MTV News in an exclusive statement. “This summer will be one for the books!”

Shortly after announcing the tour, Spears and Minaj struck up a Twitter conversation that felt as if they were already throwing slumber parties on their tour bus.

“Could not think of a sexier Femme Fatale than @NickiMinaj to come on tour with me! Gonna be a hot summer people!” Spears tweeted, kicking off the Twittermance. “The #FemmeFataleBARBZ wont know what hit em. Ready or not people, here we come….”

“Hot INDEED Your Fierceness!!! This tour’s gonna KICK ASS!!! The #FemmeFataleBARBZ r READY!!! Let’s GO!!!” Minaj tweeted back to the star, before adding, “Let’s keep the ‘other thing’ a secret for now…”

Nicki Minaj phoned Ryan Seacrest to dish about the highly-talked about performance plans.

The hip-hop princess left the following message on the radio hosts’ voicemail:

“I’m calling to let everyone know how thrilled I am — how honored I am to be going on the road with the iconic miss Britney Spears this Summer. I just know that when the Femme Fatales and The Barbs get together we’re going to kick major ass.”

“All good things to those who wait….”

Minaj is currently in the midst of the “I Am Still Music Tour,” headlined by Lil Wayne. That tour wraps May 1 in East Rutherford, NJ. Minaj will join Spears shortly after she wraps up. Spears‘ tour kicks off June 16 in Sacramento, California, and will run for 26 dates through North America, winding up August 13 in Toronto. Select tickets go on sale April 30.

“This is the Femme Fatale tour, and I’m thrilled to have the hot Nicki Minaj join me and [opening acts] Jessie and the Toy Boys and Nervo will get everyone on the dance floor,” Spears said early Tuesday about the tour. “Can’t wait to take the Femme Fatales on the road.”

What do you think about Nicki joining Britney on tour? Let us know in the comments!