Prior to Bruno Mars performing on Saturday Night Live, he sat down with ELLE Magazine and got into depth about his new album, what he thought about Kanye West‘s SNL Performance, and what his future plans are.

Check it out after the jump…

If you don’t recognize Bruno Mars, then just turn on the radio. He’s the R&B mastermind writer/producer behind practically every ounce of DJ-fuel: Cee Lo’s snappy Motown kiss-off “Fuck You,” B.O.B’s sultry single “Nothing On You” and Travie McCoy’s catchy ode to capitalism, “Billionaire.” On Tuesday, the 24 year-old Hawaii native released his solo debut, ‘Doo-Wops & Hooligans,’ anchored by the melodic “Just The Way You Are.” And this weekend, he’ll provide the soundtrack to Saturday Night Live.

ELLE: Even though you were behind some of the biggest songs of the summer, was going solo always your goal?
Bruno Mars: I got signed at a young age, and, it’s not like the movies—you don’t get signed and all of a sudden hit songs falling into your lap, so I had to learn and see the way things were behind the scenes. Luckily, I got a chance to sell one of my records. That helped pay rent, so I figured that I’d just start producing for other acts and then hopefully, one day labels would hear me sing these demos and take a chance.

ELLE: You famously wrote Cee Lo’s “Fuck You.” How did you two meet?
BM: We’re label mates, and I knew that he was working on his album so I just kept putting it in everyone’s ear, like, “Yo, I need to work with him. It’d be a dream come true.” We hooked up at the studio, we started working, we did a couple of records together. We did a record on Travis McCoy’s album called “Dr. Feel Good,” which he’s singing on; he’s on my album, “The Other Side,” so it’s only natural. We all got to the studio and came up with one of our favorite songs.

ELLE: Were you worried “Fuck You” wouldn’t get airplay because of the lyrics?
BM: You know sometimes, you just gotta do things that feel right. And Cee Lo’s the type of artist who’ll say whatever the hell he wants to say.

ELLE: What are you going after sound-wise on your solo album?
BM: I’ve been a songwriter and a producer for a while now and I’m always hopping around from different genre to genre, and I’m hoping “Nothin’ On You,” “Billionaire,” and “Just The Way You Are,” were a warning to people that I might not just stick to one sound. So on [Doo-Wops & Hooligans], I was just really trying to be open. I would just sit down in the studio, pick up a guitar, and write a song, whether it called for a reggae beat or whether it was a ballad. It was kind of a free fall. Let me just do what I want; let me get this out of my system. And I’m already thinking about my second album.

ELLE: You must be excited to perform on SNL this weekend.
BM: Geeze. The first time you’ll see me singing “Just The Way You Are” on TV is on that show, live.

ELLE: Will you try to weasel your way into a skit?
BM: I don’t know how those things work. I’d love to, but I’m fine with just performing.

ELLE: And you’re following the Kanye performance from last week. Did you see it?
BM: Yeah, wasn’t that incredible? That was my idea! I was gonna wear a red suit and have ballerinas dancing to “Just The Way You Are.”

ELLE: You better talk to your stylist, ASAP.
BM: No, I’m just kidding. He was amazing though, definitely, he definitely woke me up. Now you’re making me nervous. What the hell is going on? This is supposed to be a nice, sweet interview.

ELLE: Oh no, didn’t they tell you we just try freak you out here at ELLE?
BM: Right, like, “This is your first big moment. Good luck following Kanye.”

Plus check out Bruno Mars performs “Grenade” in this extended session of Billboard’s Tastemakers series LIVE at Mophonics Studios NY.

Bruno Mars has announced his first-ever North American headline tour, which will kick off November 16th in San Francisco at Slims and will continue through to a November 30th date at Boston’s famed Paradise Rock Club (see itinerary below). Tickets for the “The Doo-Wops & Hooligans Tour” are now available to the public and shows are selling out quickly. Special guests, as well as a slate of additional tour dates, will be announced shortly.

Bruno Mars has also officially released his new album, ‘Doo-Wops & Hooligans,’ as of Tuesday, October 5, 2010. Which will follow with his biggest U.S. tour schedule to date, supporting Maroon 5 & One Republic on the last three dates of the fall leg of their 2010 “Hands All Over Tour”.

From there, Mars will cross the Atlantic for an eagerly awaited European tour alongside Decaydance/Fueled By Ramen recording artist Travie McCoy, due to hit England, Scotland, Germany, Denmark, France, Sweden, and The Netherlands with dates running from mid-October through early November. The joint tour follows Mars and McCoy‘s recent series of high-profile TV performances of their collaborative Top 3 hit, “Billionaire,” including appearances on ABC’s The View, NBC’s The Tonight Show with Jay Leno and Late Night with Jimmy Fallon, VH1’s “Do Something Awards,” TBS’ Lopez Tonight, and Fox’s 2010 Teen Choice Awards. 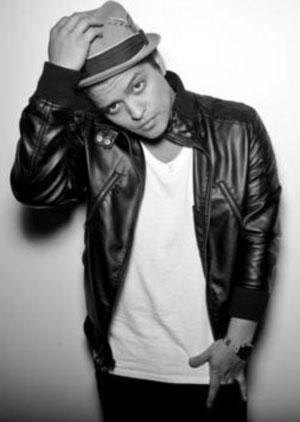 According to MTV News; Singer/songwriter Bruno Mars is formally charged!

Mars has been charged with felony drug possession, in Las Vegas last month, according to the Las Vegas Review-Journal. The “Just the Way You Are” singer is alleged to have been in possession of 2.6 grams of cocaine after he played a show at the Hard Rock Hotel and Casino on September 19.

According to Las Vegas police, Mars was taken into custody after a bathroom attendant at the Hard Rock alerted a security guard that a man was spending a lot of time one of the stalls and may have been using drugs. The attendant also said he noticed Mars, born Peter Hernandez, had a “baggy of white powder substance.” When Mars left the stall, the guard made him give up any drugs he may have had and the star produced “a white powder substance, which was consistent with cocaine, from his left-front jeans pocket.” Mars reportedly copped to his bad behavior, telling the guard he “did a foolish thing and has never used drugs before.”

Mars tested positive for cocaine at the time of his arrest and, according to The Associated Press, the star faces up to four years in jail and a $5000 fine if convicted. The singer, who has appeared on chart-rulers such as B.o.B’s “Nothin’ On You” and “Billionaire” by Travie McCoy, is due in court on November 18.

On Friday, Mars’ label Elektra issued a short statement, reading, “We congratulate Bruno Mars on his chart-topping success, and provide him with our full love and support.”

When idolator.com interviewed Bruno Mars last month and asked the 23-year-old hitmaker if he had any crazy Vegas stories he’d like to share, his response was:

“Yeah, I don’t wanna talk about that.”

He was joking, but his arrest at 2:40 a.m. on Sunday in Sin City was no laughing matter.

Rising singer-songwriter Bruno Mars was found with a bag of cocaine in a Las Vegas casino bathroom following a nightclub show over the weekend, police said Monday.

The “Just the Way You Are” crooner was arrested early Sunday after being detained by security at the Hard Rock Hotel & Casino. Mars, whose real name is Peter Hernandez, was found with 2.6 grams of cocaine and booked into county jail on suspicion of possession of a controlled substance, police said. He faces possible felony charges.

An aide to Clark County District Attorney David Roger in Las Vegas said the case was under review and formal charges had not been filed, though Hernandez, 24, was given a court return date of Nov. 18. The office declined further comment.

Hernandez‘ publicist at Atlantic Records did not immediately return messages seeking comment from The Associated Press. A hotel spokeswoman declined comment. It was not immediately clear whether Hernandez has a lawyer.

An arrest report for Hernandez said a bathroom attendant told police Hernandez was taking a long time in a stall with a bag of a white, powdered substance. The attendant alerted a security guard, who confronted Hernandez as he left the stall. The security guard said he asked Hernandez to hand over any narcotics he had, and Hernandez pulled a bag of cocaine from his left-front jeans pocket. Hernandez was taken to a holding cell where he was questioned by an arresting officer. When asked what was going on, Hernandez replied: “Can I speak to you honestly, sir?” and said he acted foolishly and had never used drugs before, the arrest report said.

Mars performed a show Saturday night at the Hard Rock’s Wasted Space nightclub. The hotel-casino is separate from the restaurant chain with the same name.

Meanwhile, Mars has yet to acknowledge his arrest. He tweeted the following early this morning:

“Texas is dope! Im in dallas rite now looking foward to meeting some folks @ the radio stations. tune in for a special live performance”

His debut solo single, “Just The Way You Are”, is currently No. 3 on the Billboard Hot 100 chart. He sang the hooks on B.o.B’s “Nothin’ on You” and Travie McCoy’s “Billionaire” – both chart-toppers – and co-wrote and produced Cee-Lo Green‘s latest expletive-laden single. Mars’ debut album ‘Doo-Wops & Hooligans’, is scheduled for release Oct. 5.

Source: idolator.com amongst other sources

“What the hell is going on? Why is it that now all these brilliant artists want to damage their careers on some serious dumb-ass shit. Bruno Mars is so talented, and he just ruined his reputation by adding this red flag to his name. Well lets just say allegedly. ;o). I wish him well.”