Joe Budden‘s Mood Muzik 4: A Turn 4 The Worst arrived a little early. Make sure you support and buy it when it drops here.

Here’s what Chicago Now says about the new mixtape:

“Joe Budden’s Mood Muzik 4: A Turn 4 The Worst has arrived a few days early and it is a full mixtape that, based on my favorable early impressions, is shaping up to be one of the strongest mixtapes of the year. You know Budden is gonna keep it real with some eye-opening and thought-provoking lyricism, which he has displayed on various sanctioned leaks leading up until now. I was immediately drawn to one of the mixtapes few, yet big collabos “Dessert 4 Thought”, which not only features a superb verse from Joey, but also from guest stars Styles P and Pusha T. This is the type of project I really need to unwind and listen to from start to finish with no distractions and I look forward to doing just that this weekend. Like I said, from the tracks previously released and some new ones I have begun to sift through, this one is a must-download so don’t hesitate above (shouts 2 UHTN), and check out the ‘making of’ MM4 below.”

Nicki Minaj doesn’t even have an album out yet, but she was one of the biggest winners at the 2010 BET Hip-Hop Awards, which were taped on Saturday, October 2 in Atlanta for an upcoming broadcast. The Young Money rapper took home Rookie of the Year, People’s Champ, and Made You Look (style) awards, MTV News reports.

Fitted to kill in a black dominatrix-like outfit, NYC-ish blond bob hairdo, pink nails and lipstick, Minaj grabbed her awards and “ran.” Minaj made sure to thank her “Barbies” as she accepted the award for “Favorite By Fans.”

“I’m paving the way for girls,” she continued. “I wanna thank all the girls of hip-hop.”

Jay-Z, who was not in attendance at the awards, was also able to bag three awards. Tied Minaj’s award total, taking home trophies in the categories of Perfect Combo (Alicia Keys duet “Empire State of Mind”), CD of the Year, and Best Live Performer. Other awards went to Rick Ross (Club Banger of the Year and Track of the Year for producer Lex Luger, both for “B.M.F. (Blowin’ Money Fast)”), Salt-N-Pepa (I Am Hip-Hop), Diddy (Hustler), Swizz Beatz (Producer of the Year), and DJ Khaled (Best DJ).

Now let me remind you, the 2010 BET Hip-Hop Awards kicked off on quite the high note as Rick Ross, DJ Khaled, and Diddy opened with “B.M.F.,” one of the year’s biggest hits. To the surprise of those in the audience Ross‘ set then segued into an unexpected performance from MC Hammer, who danced frantically with a group of dancers as he performed ‘2 Legit 2 Quit.’

The 2010 BET Hip-Hop Awards welcomed a number of newcomer’s including Alabama’s own Yelawolf who performed alongside Big Boi for their hit song “You Ain’t No DJ.”

“I feel overwhelmed, you know, coming out with Big Boi from OutKast and doing our record. I never thought it would lead to here, but I’m taking it in. I’m happy and I’m honored to be a part of it,” Yelawolf explained to The BoomBox.

The Hip-Hop Awards cypher’s proved yet again to be one of the highlights of the show with a number of artists taking part in this Hip-Hop Awards staple. Kanye West gave folks a taste of G.O.O.D. Music with a cypher that featured verses from himself, Common, Big Sean, Pusha T, and Cyhi Da Prynce.Ice Cube and Rev. Run kept it all in the family with a cypher that consisted of performances from Diggy Simmons, JoJo Simmons, OMG, and Doughboy.

More images from the performances below and after the cut.

This year’s 2010 BET Hip-Hop Awards, hosted by Mike Epps, will air Oct. 12 at 8 P.M. on BET. Will you be tuning in? Which award categories are you most looking forward to seeing televised?

Kanye West has kept this whole “G.O.O.D. Friday” thing going? This week, West has again linked up with Jay-Z, Pusha T, Swizz Beatz, RZA, and Cyhi da Prince. It makes for yet another near-epic filled with some choice quotables, especially during Jay-Z and Pusha‘s verses, and slightly blunted, gloomy production. Swizz doesn’t do much other than the intro and outro sections of the track. Unfortunately, RZA, who sounds great on this beat, finds his contribution kept to a minimum, too, though Cyhi going off in his verse kind of makes up for that.

Listen to the latest track below….
LISTEN: ( Audio via GlobalGrind)
DOWNLOAD IT: Kanye West – “I’m So Appalled” [NoDJ] | Mediafire

Less than a week and a half ago, Kanye West unveiled his single “Runaway” which features Pusha T at the 2010 MTV Video Music Awards through a charged performance. The single also has an accompanying 40 minute film to boot.

Today West revealed the official cover art to the anthem claimed to be for “assholes, douche-bags and jerk-offs.” The artwork features a ballerina twirling against the composition of a green wall, seen below:

This one is missing the trademark artwork since it wasn’t a G.O.O.D Friday release. “Runaway” is expected to be included on West‘s fifth album, reportedly titled ‘Dark Twisted Fantasy’, due this fall on Def Jam Records.

Nicki Minaj and Drake got married?

According to their Twitter accounts, the announcement has been made.

Nicki tweeted: U scurred @drakkardnoir ready to make the announcement or wha?.

While he replied back: @nickiminaj Baby I am never scared. PROUD is more the word I would use.

Check out the messages below…

In my opinion it’s all a hoax, but nowadays you never know. If so, congrats to the both of them. 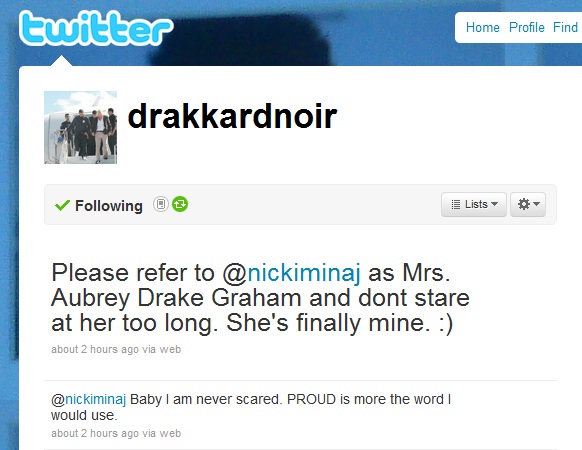 Everybody loves a comeback, and T.I. is in full force with his return. One month after the self proclaimed ‘King of the South,’ T.I., was released from prison on felony gun possession, he tweeted that the premiere of his first post-prison music single, ‘I’m Back’, off his forthcoming album ‘King Uncaged’ hit the internet, it finds Tip getting reacquainted with his hometown.

‘King Uncaged’ is already being compared to 2 Pac’s 1996 multi-platinum selling album ‘All Eyes On Me’ that was released shortly after his prison stint.

“This is the most significant return from incarceration that the game has had since then,” T.I. says. “Just given the enormous success of that project, everyone’s expecting the same results. I just want to meet the expectations, if not surpass them.”

On Monday night, the Atlanta rapper premiered the video for “I’m Back,” the first track he’s released since he ended his federal prison sentence earlier this year.

The clip debuted on T.I.’s website, and features him returning to his roots.

Tip, sitting shotgun in a black SUV, is driven to a group of buildings. The truck slowly pulls up to a warehouse in the complex and Tip exits the vehicle as the door to the building opens. T.I. quickly enters and lights a match to brighten up the dark space.

Clad in a hoodie, T-shirt and little jewelry, Tip walks up to a covered car parked inside.

When T.I. pulls back the cover, the camera finds his car, a Ferrari, waiting for him. The rapper shuffles over to the trunk of the import and inside spots a leather bag, from which he retrieves wads of cash and an expensive watch and necklace set. And his shades.

From there, Tip takes a spin in his car and gets reacquainted with his hometown.

But like the lyrics in the song, T.I. isn’t revisiting his past mistakes, he’s moving on.

“Probably just seen Wayne, Gucci Mane, me and Boosie all go to prison, now he flippin’ his whole image,” Tip raps. “Really trippin’, listen dude, for you that’s not in your cards/ Think the power’s in the gun, but overall it’s in your heart.”

The rapper, who hasn’t spoken much since he was released from prison late last month has been hard at work on his album, which is scheduled to arrive in stores and online August 17.

In an interview that was posted on his site recently, the rapper spoke about the project and promised fans a more aggressive tone on ‘King Uncaged’.

“I want to maintain the level of success I’ve been fortunate enough to do, over and over again, over the years,” Tip said. “This album is different in many ways. I think that Paper Trail was a lot more about thoughts; this is more about feelings. This is significantly more aggressive, or at least at this period in production. Who knows? I can do 10 love songs tomorrow and change the direction. At this point, right now, it’s going hard. It’s going hard like classic T.I.”