Boxer Floyd Mayweather is the latest celeb that has found himself in some baby mama drama….at least he’s smiling about it. Earlier today he was arrested in Las Vegas on a felony theft charge stemming from a domestic complaint from his child’s mother. The mother of 3 of his kids sought a protection order after he allegedly beat her and stole some of her personal items including a cell phone. Floyd went missing but was busted earlier today in Vegas on a Grand Larceny charge.

Yesterday evening, his friend 50 Cent took to his Twitter account and basically put all of Floyd and his baby mom’s business on front street.

Another case of angry baby mama wanting money. Police are looking for @FloydMayweather. I just got off the phone with him. She’s claiming he hit her but has no bruises. Floyd went to see his kids last night if a fighter of Floyd caliber hits u, u would b bruised.

I talked to him before and after the situation he wasn’t even upset.He said he asked her why was the house so dirty she started trippin’. He bought nice clothes for his kids they were all over the place.His baby mama said shes not gonna force them to wear clothes they don’t want. I told him that’s crazy. I know how he felt. I met her before so I told him she would calm down. Can’t believe she called the cops.

She has a girlfriend that stays in the guesthouse that Floyd is paying for her as child support that is helping fuel the situation. Floyd said he feels like her girlfriend is using her and pushing her in the wrong direction. This is crazy to me. I performed in club pure on NYE in Vegas I remember Floyd showing me a ring he bought her for $1M. Who can u trust!

This sh*t really scares me man. she’s a smart girl I talk to her a few times. I hope she just stops my stomach hurting behind this sh*t. I speak to Floyd every day he like my brother his baby’s mother did this sh*t before in 2003 dragged him to court then said he didn’t hit her.

According to the complaint, his baby mother claims that Floyd showed up at her house Thursday morning and began yelling at her about her new boyfriend. He then pulled her by her hair, threw her to the ground and began punching her in her head.

She claims he continued to beat her in front of their kids and threatened them by saying that if they ran or tried to call the police he would beat them the same way. He also allegedly told her he would kill her and her boyfriend.

“WOW!! I don’t know if I should be shocked or not surprised, being that he’s been in the media for the past few weeks. Sounds like he’s seeking some serious attention.” 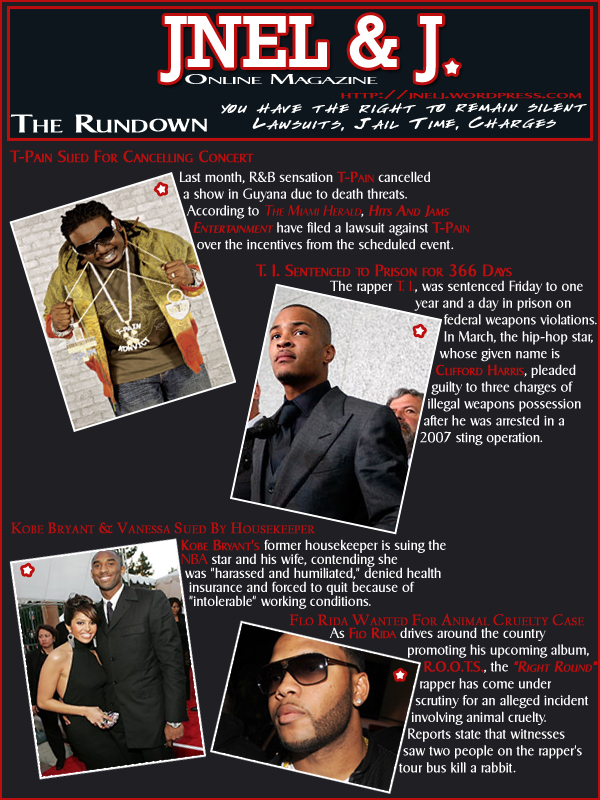 The self-proclaimed “King of the South” will rise again. In about 366 days’ time.

As expected, T.I. was sentenced today to one year and one day in Georgia prison as part of his plea deal with prosecutors over a 2007 felony weapons charge.

“Today I would like to say thank-you to some, and apologize to all,” the rapper said.

“Everything I learned was through trial and error. I’ve learned lessons in my life to put in my music so people won’t make the same mistakes as I.”

The 28-year-old rapper, whose real name is Clifford Harris Jr., is required to voluntarily turn himself into prison within the next 30 to 60 days, but is not expected do so before May 19.

Northern Georgia District Judge Charles Pannell Jr., who praised the artist for exceeding the expectations required from his plea deal, acknowledged that T.I. had commitments that prevented him from being jailed before the May date.

It’s unclear where he will serve his time, though court officials acknowledged that he would be receiving credit for the 305 days he already spent in home detention.

“I think this has been a great experiment,” Pannell told the rapper of his plea deal. “I hope this experience can lead to other experiments so others won’t make the same mistake at all. I congratulate you.”

The Grammy-winning hip-hop star, who donned a charcoal-grey suit and was accompanied by his family, manager and longtime partner Tameka “Tiny” Cottle at the morning hearing, brokered a deal last March.

He originally faced up to 10 years behind bars.

The reformed rapper has made 262 public appearances as part of his community service agreement in addition to taking part in a pro-voting campaign, working with children and appearing in the MTV reality show Road to Redemption. So far, he has completed 1,030 of the 1,500 total community service hours required.

As part of the deal, the rapper also agreed to forfeit all of the firearms and ammunition involved in the incident and waive his right to an appeal.

“We are very pleased with the result in this case,” U.S. Attorney David E. Nahmias said. “For the past year, Mr. Harris has used his high public visibility, his exceptional communication skills and his real-world life experience to deliver the right message to literally thousands of kids.”

It’s an impact Nahmias said more than made up for the deal he brokered for less time behind bars.

“His prison sentence was reduced from what it might have been, but the public got something very significant in exchange: the extensive and unique community service program that Mr. Harris committed to doing when he pleaded guilty.

“By all accounts, his community service has been a remarkable success—it certainly exceeded our expectations—and there is still more to come when he gets out of prison.”

T.I. was arrested on Oct. 13, 2007, just hours before he was scheduled to headline the BET Hip-Hop Awards after cops busted him attempting to buy unregistered machine guns and silencers.

As for his sentence, being as it is (just) more than one year long, he will be eligible for early release, should his good behavior warrant it. Had his sentence been one year or less, he would have been required to serve the duration of the time behind bars.

“I wish him the best, and hope for a banging new album, when he gets released. We love you T.I.”