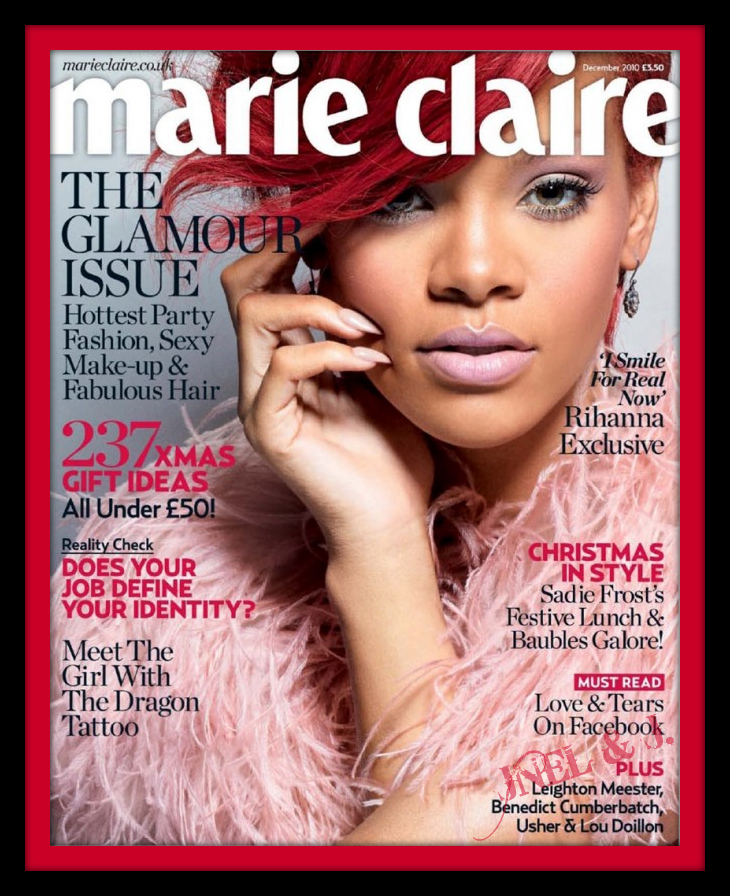 Rihanna covers the December 2010 Issue of Marie Claire UK, and if I must say so myself, she looks stunning. In her interview she talks about when she realized it was really over between Chris Brown and herself. She also talks about the new man in her life, Matt Kemp and how she can never seems to stop smiling when she’s with him.

EXCLUSIVE Marie Claire UK Interview: Rihanna on surviving the bad times and how she is happier and stronger than ever

She’s the toast of the music industry and the hottest talent around. Introducing our stunning December cover star, Rihanna. We caught up with the “Rude Boy” superstar to talk about surviving the bad times, learning to love her imperfections, and how she is happier and stronger than ever.

And as she sparkles for the cameras, debuting new fiery red hair (‘she has been dying to go red for years,’ says make-up artist Karen Darnell) you’d certainly never guess it has been such a hard year for Rihanna.

On her on her much publicised romance with Chris Brown.

‘Eventually, I remember waking up one day and I knew I was over it.’

‘One day. I remember I was in New York at the Trump Hotel and I woke up and I just knew I was over it.’

But after coming out of it the other side, the songstress admits she’s a different person now.

On almost losing herself and how she bounced back

‘I was very lost. I have to say I felt really confused,’ she says, her eyes welling up.‘I hate talking about it but it was really crazy because I felt so out of touch with myself and when that happens… It’s scary because nothing you say or do feels like it’s you.

With all that she’s been through, some critics have questioned her recent appearance on the Eminem single, ‘Love The Way You Lie’ and how, in their view, it glamorises domestic violence. Rihanna has no regrets.

Did she relate to that on a personal level? ‘Absolutely. Absolutely! Every word in that song is true. It would take somebody who’s been on the inside to understand how magical those lyrics are.

‘Everybody loves the song but the lyrics can never hit home until you’ve seen it, witnessed it, in your home or experienced it yourself.’

On her relationship with Matt Kemp

Despite it all, the drama and the tears, Rihanna is relieved to have finally come out the other side, adding

I’m so happy for Rihanna. She’s a real inspiration to a lot of young girls. I’m glad she finally set the record straight as to how she felt when she was going through a rough path in the past.

Reunited after a few months apart due to Rihanna touring in Europe, the couple, who started dating last December, indulged in some cute PDA while they waited for Kemp‘s new toy.