Niketown the Manhattan flagship store was closed Saturday morning after the nasty bedbugs were discovered inside, the Just Do It corporate announced.

“Our primary concern is the well being of our consumers and sales associates,” Nike said in a brief statement. “We are taking all proper steps to eradicate the problem and we expect the store to reopen shortly.”

The massive five-story outlet on E. 57th St. is home to an assortment of Nike products – from pricey footwear to headbands to T-shirts. The company’s high-profile endorsers include all-time NBA great Michael Jordan, along with Tiger Woods and Derek Jeter. It is also a favorite spot for tourists and shoppers.

Niketown NY is the latest high-profile victim bitten by the tiny bugs. The company’s downtown store on Mercer Street isn’t affected. There were recent infestations at the Empire State Building, the Brooklyn district attorney’s office, and the Time Warner Center. It also joins the ranks of Hollister, Abercrombie & Fitch, Victoria’s Secret, Google, AMC Empire 25, the Manhattan DA’s office and the Roosevelt Houses.

The creepy crawlers also turned up in the offices of Elle magazine and part of Rikers Island.

A study released last month by the pest control company Terminix ranked New York as the nation’s No. 1 city for bedbug woes.

“It’s one of our most popular stores,” said Nike spokesman Kijuan Wilkins.

Jnel & J. would like to wish you all a Happy Valentine’s Day!
Enjoy! 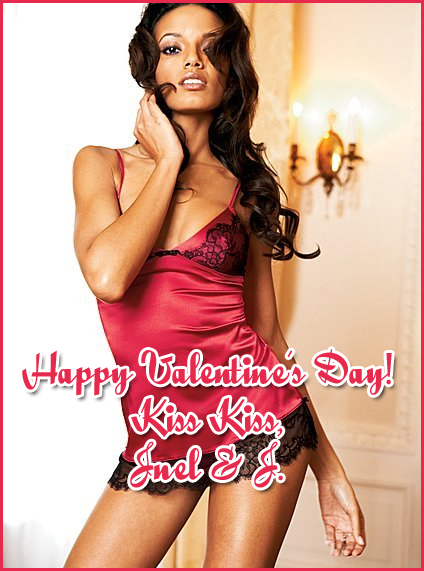 Detail: Vintage style that’s sure to strike your fancy with a Satin bow detail.

“This is definitely on my must-have list. I love it!!”

This year’s annual holiday lingerie fashion show will be held for first time in Miami at Fontainebleau Miami Beach. The Victoria’s Secret Fashion Show was taped on November 15th in Miami, and will air Tonight at 10 p.m. ET on CBS. The annual holiday fashion show will feature supermodel Heidi Klum, and top models Alessandra Ambrosio, Adriana Lima, Selita Ebanks, Marisa Miller, and Miranda Kerr, among many others. I must say the lingerie looks sexier and sexier every year. I love to see something sexy and spicy to make my night and get me in the mood to go out shopping the next morning for that hot new secret piece of lingerie.