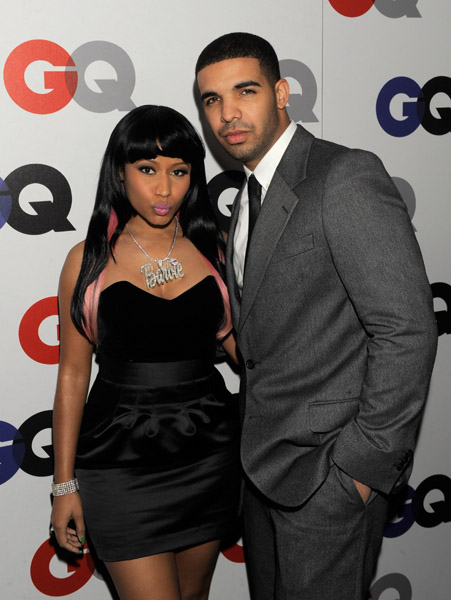 Nicki Minaj and Drake got married?

According to their Twitter accounts, the announcement has been made.

Nicki tweeted: U scurred @drakkardnoir ready to make the announcement or wha?.

While he replied back: @nickiminaj Baby I am never scared. PROUD is more the word I would use.

Check out the messages below…

In my opinion it’s all a hoax, but nowadays you never know. If so, congrats to the both of them.

T.I. and longtime girlfriend Tameka “Tiny” Cottle have officially tied the knot on Saturday, July 31, 2010 in Miami, according to MTV News. The nuptials are best described as a fairytale wedding! After exchanging vows at the courthouse on Friday, TI and Tiny did it up right on Miami’s Star Island Saturday. Tiny wore a Valentino gown and TI wore a white tuxedo by Prada. They arrived at the ceremony in a horse-drawn carriage that looked like Cinderella’s pumpkin. The party even included fireworks.

The guest list reportedly included names like Kandi Burruss from The Real Housewives of Atlanta, and Young Dro, Yung LA and Rozonda “Chilli” Thomas, Usher, Nelly, Jermaine Dupri and more partied until the wee hours of the morning at Cameo Nightclub last night.  Rihanna was also spotted in the building after performing at American Airlines Arena. Bow Wow and Angela Simmons were there too. El DeBarge sang for the happy couple. After the wedding, the new Mr. and Mrs. Harris went to Atlanta and then Las Vegas for more celebrations.

Tiny’s rep Prince Kennedy denied rumors that the couple is to say “I do” in yet another locale. “A lot of people initially heard they were doing it in Hawaii. They are not,” says Kennedy.

Though it would seem the couple has made the wedding a big to-do, Tiny said earlier this year she wanted a “private” wedding and was waiting for the right moment to make it official.

“We living, we’re happy, we’re in love. I mean, it’s no doubt in my mind that he doesn’t love every piece of me and vice versa, so we’re just doing what’s comfortable and what works for us,” Tiny told Vibe magazine. “Tiny and T.I.: Not for the world. When we get ready to make a move, we will make it. We just can’t do it for everybody.”

Check out some photos from their wedding night below….

According to sources, Alicia Keys and Swizz Beatz celebrated their new marriage Saturday, July 31st during an intimate ceremony aboard a 260-foot yacht on the Mediterranean Sea in Southern Corsica, Piantarella, which is located a few kilometers from Bonifacioon. Well according to People.com, there was no yacht or over-the-top festivities – just family and close friends as Alicia and Beatz tied the knot in a private ceremony Saturday in a private home on the Mediterranean Sea.

Alicia wore a Grecian-inspired Vera Wang dress; shoes with no heel designed exclusively for her by Christian Louboutin, a diamond tiara and carried a bouquet of purple calla lilies. Beatz looked handsome he was decked out in a Tom Ford tuxedo. The couple’s friend Dr. Deepak Chopra presided over the nuptials.

The couple, who are also expecting their first child together, have been together since fall 2008. They announced their engagement and baby news in May.

While the newlyweds don’t know the gender of their baby, Beatz says the addition of another child will be nothing short of magical.

“Whatever we’re blessed with, that baby is being born to blessed parents,” he recently told People. “Alicia is definitely one of those great parents-to-be. She’s super ready. Super glowing. Super happy.”

The news comes just a day after T.I. tied the knot with his longtime girlfriend, Tameka “Tiny” Cottell in Miami Beach, Florida.

Check out some photos below of Alicia & Swizz’s wedding… 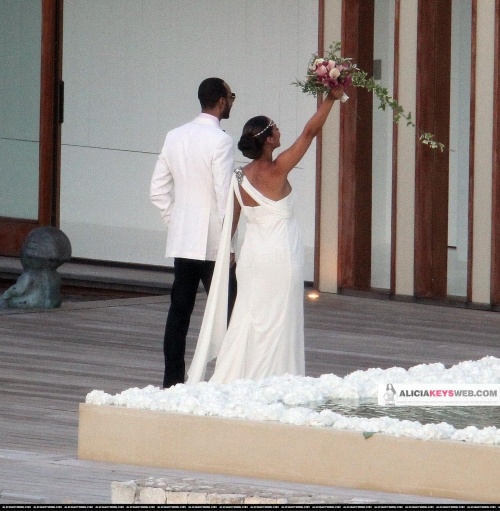 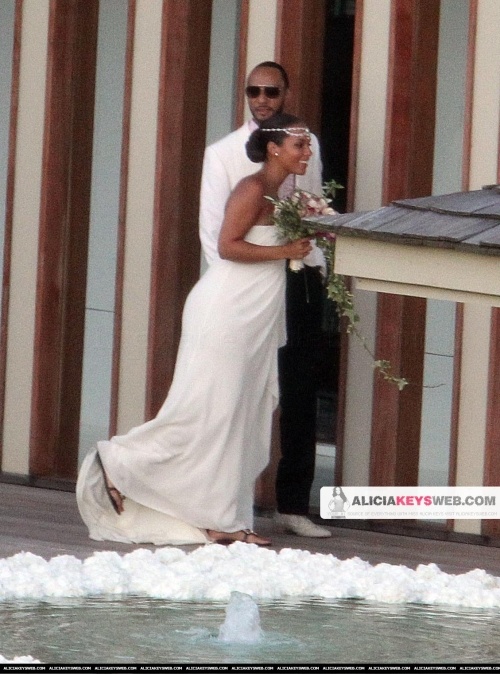 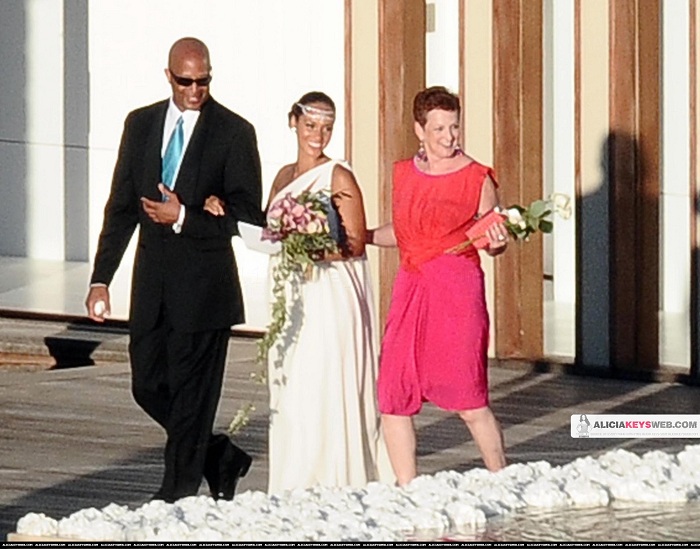 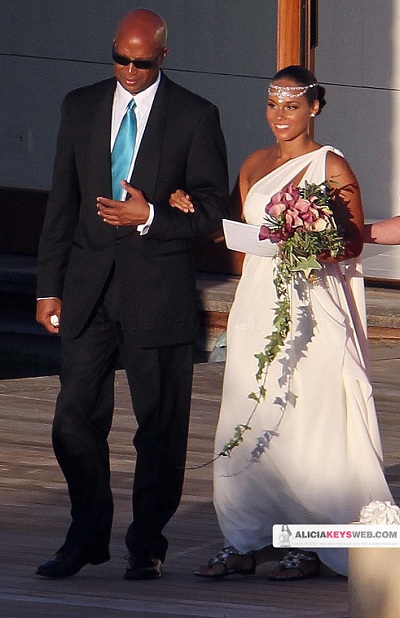 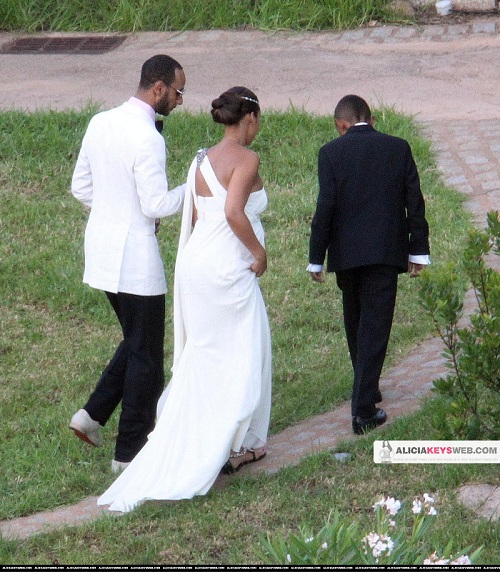 “We wish both couples the best! Congratulations!”

That’s right, you heard correctly. According to our friends at MediaTakeOut, it’s official! Swizz Beatz and the beautiful Alicia Keys are getting married this weekend! They are finally making it official after over seven months of engagement. The festivities will be held on a 200 ft. yacht they have chartered for the wedding’s pre-party. Guests will be whisked away in Miami, and then taken to the Caribbean for the romantic official wedding. Some celebrity guests include Oprah Winfrey, Jay-Z, Beyonce’, Diddy, Tyra Banks, Mary J Blige and many more.

This will be the wedding of the year…a grand spectacle magnificence. 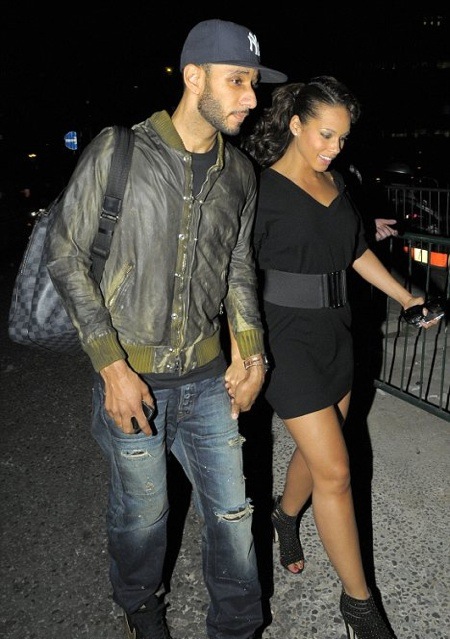 R&B singer Ashanti has hinted she will marry Nelly in 2009.

Just four months after going public with their four-year romance, Ashanti has confessed she is planning to walk down the aisle with Nelly.

When asked by Us Weekly if wedding bells were on the horizon , the singer said: “Absolutely. It’s in the cards for me. I believe that I have a couple more things I need to do before that happens.”

Natasha Bedingfield has found her “Soulmate.”

“Our wedding day was everything we’d hope it would be,” said the 27-year-old bride. “It was simple, beautiful and natural. Free from trappings or formalities, it was more about expressing our love for one another infront of those we hold dearest to us than anything else.”

Bedingfield wore a cream silk Vera Wang dress and H Stern jewelry while the groom wore Armani. The 30-minute ceremony took place in front of about 150 guests at the Church Estates Vineyards, where Fergie and Josh Duhamel wed in February.

The newlyweds dated for two years before announcing their engagement in 2008.

“I want to congratulate them both”

“Kimora and Djimon had a secret “commitment ceremony” in Djimon’s hometown in Benin, Africa last summer.  Yeah we knew she was rocking that big ass wedding ring for a reason.  They snuck away to his home so that Kimora and his family could meet.

And while there, they had a full out commitment ceremony like only Kimora could have:

“Both Kimora and Djimon wore traditional dashikis.  She went whole hog with the African theme − there were African drums, a traditional ceremony with dancers . . . they even had a hut!”

Apparently they opted for the commitment ceremony because Russell and Kimora were still legally married.  No word on if this commitment is legally binding here in the states even now that the Simmons’ divorce is final.

Apparently Ming cried throughout the entire thing and Aoki slept through the whole thing.  A source says they were “confused” about what was going on.  I wonder how they’re going to act when this new baby of Kimora and Djimon’s hits the scene.

And by the way, Ming and Aoki are now calling Djimon daddy.  Well, “Baba” to be exact–which is a cultural term meaning Father.  So what does Russell have to say about all this?

“I want to congratulate Kijimon on their wedding if it’s official news and their new baby which is on the way.”